As I am no longer a company employee, I had to figure out independent health insurance. Fortunately I have a couple friends who also live here in Myanmar who were able to tell me about a company that provides coverage both in the U.S. and abroad. I have been told that it would probably be cheaper in the long-run to just self-insure (e.g. Thailand apparently has world-class healthcare and a week-long stay in a hospital, on drip, may be ~$1,000 from what I hear) or receive abroad-only insurance. With that said, in the event that serious illness occurs, it would be nice to be able to head back to the U.S. for treatment (in addition to being covered during trips to the U.S.)

To that end, I have decided to use GeoBlue (https://www.geobluetravelinsurance.com). The benefit is that GeoBlue offers access to the Blue Cross Blue Shield network in the U.S., in addition to offering coverage abroad. Unfortunately, gathering all the documents together for the past two year’s of medical coverage was a bit of a hassle (delayed my enrollment process by about 7 weeks) , but with that done things should be good to go.

Here are some more details:

Xplorer Premium actually had four plan options. If you’re interested in my thought-process, I’ve included some of my analysis below. It was interesting thinking through the value one should put on the concept of “feeling secure” (despite the probabilities of occurrence). Fo reference, I went with Plan 3.

Cost of four plan options based on being very sick (burning through entire co-pays) or not being sick at all:

Three-year scenarios based on number of years being very sick (N = not sick / S = very sick): 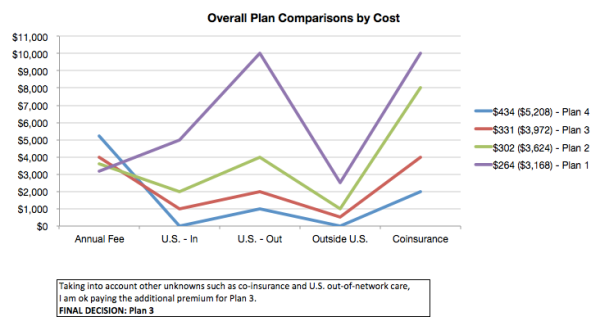 For a point of comparison, I did look into Aetna International, which is what I was covered with under Proximity. Unfortunately, it turns out that despite this coverage, they actually don’t offer individual plans for people living in Myanmar.