By now most of you have probably heard about the results of the 2015 elections here in Myanmar. In short, the opposition party (NLD) led by Aung San Suu Kyi won a sweeping victory.

People have been asking me what it’s been like here. It’s actually been pretty quiet overall. I’m sure if I ventured out to the rallies, polling stations, or the party headquarters I’d see much more activity, but there wasn’t widespread celebrations and parades in the streets across the city. Election day itself was actually the quietest day I have ever experienced in Yangon — it was like a ghost town.

This is just the first step in the path toward change. Yes the NLD has won, dethroning the military-backed incumbent, but the military is in fact still in the background. How much are they still holding the strings? Well, we’ll find out over the next 5 years that the NLD has in the coming term.

Here’s an article from the New York Times that sums up the challenges:

I found this map on Facebook, which is kind of janky, but it gives you a broad sense of the results across the country. Red = NLD. Pyithu Hluttaw = House of Representatives. 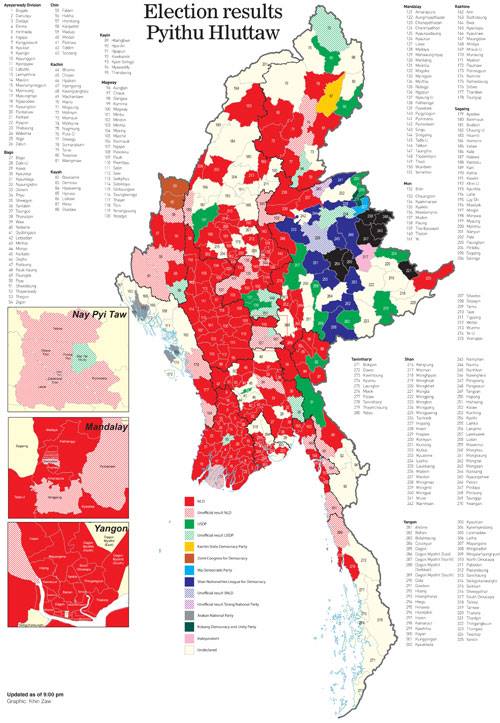 The below image (I believe from Myanmar Times) is what the House of Representatives (Pyithu Hluttaw) is going to look like. That big block of green on the left is the automatic military presence. Red=NLD.

The below image (from Wikipedia) is what the current setup looks like. The colors are a little misleading.

Hope that provides a bit more color, and a summary, to what you may be hearing in the news. There is a ton of additional commentary on the NLD, elections, incumbents, ethnic groups, etc. but I’ll let you all dig into that based on your interest levels.

Note: I pulled these charts at different points in time post elections (from different sources), so the numbers/representations may have changed or may not be totally accurate.