Month 4: The Curtain from the Inside

Featured Image: A working group with the government that I participated in during an off-grid electrification conference in Nay Pyi Taw.

It’s been a while since my last Reflection post, but I was also back in the U.S. for a couple weeks at the end of the December for the holidays. A lot has taken place since being back in Myanmar. The two primary things I would like to share revolve around a much greater understanding that I now have of:

I want to highlight a fantastic paper written by two people I’ve had a chance to speak with from Harvard University, David Dapice and Tom Vallely, who conduct macroeconomic and political work on Myanmar: Choosing Survival: Finding a Way to Overcome Current Economic and Political Quagmires in Myanmar. Much of my insight has been from speaking with them and reading their work. I will highlight here some of the more salient and hotly debated topics.

Does the government control the country? This question was a big insight for me. I wanted to understand how to think about the negative attention that Myanmar has received from the slowing of change. It’s important to understand that power in Myanmar is split between a number of groups:

A massive amount of extraction (e.g. jade and timber) has taken place by well-connected military affiliates (“cronies”) who siphon money from the country by selling massive amounts of resources across the borders (e.g. to China) while pocketing the vast majority of the profits. Apparently, acquisition of land and extraction rights was dubious to begin with.

These “cronies” represent just one constituency that would need to be convinced to relinquish their monopolistic hold on the natural resources of the country. 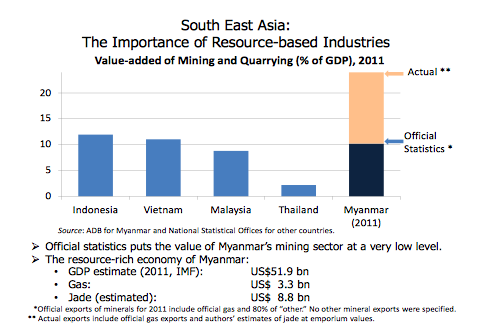 How to people really feel about the ethnic tension in Rakhine State? It’s sad to say, but it seems that the conservative Buddhist population here simply does not like the Muslim Bengali population (“Rohingya”) in Rakhine. It seems that these people from Bangladesh migrated during British colonization, a time when border flows may have been regulated in a very different way. Now, what happens when the great-grandchildren of these original migrants are told to leave Myanmar, their home?

The Myanmar people view the Bengali/Rohingya as illegal migrants (their ethnicity was not included on the list of ~130 ethnic minorities that was created by the Buddhist government to determine citizenship – a dubious decision). Unfortunately, from what I’ve heard, Bangladesh (the home of the original migrants) is not open to receiving them back. The result is a state of persecution, rancid camps, and waiting.

There are talks of the government keeping the situation as is until after the elections. An interesting solution that I have heard would entail allowing the Bengali/Rohingya to claim citizenship as “unspecified ethnic minority” and then the government utilizing economic stimulation to mix the Muslim and Buddhist groups through business to ease tensions and promote integration.

So what is being recommended to the government from the outside? “New Federalism.” Not dissimilar from the U.S., think of this as different states each being able to operate its own local government but with a national/Federal government managing the overall entities. Each entity would have to sacrifice to gain national unity, but in doing so they would attain peace and development. If this is not successful, the risk would be of Myanmar devolving into a country like Pakistan, versus developing as a nation like Indonesia. Furthermore, with the continuation of ethnic tension and extraction, national identity may continue to degrade to a point where Myanmar is simply consumed by China as a de facto (or actual) colony.

I have learned so much in the last 4 months about the state of the energy in Myanmar. The biggest realization is how much attention has focused on this issue.

The government’s plan is to connect 98% of Myanmar to the national grid by 2030. In the interim period, the government is giving out a huge number of free solar home systems (which is skewing the market), and there is a substantial amount of aid money itching to the best on subsidized products as a Band-Aid to grid access. It’s looking like much of the core regions of the country will receive grid acess within the next 3-5 years (with the big caveat being the outcome of this year’s elections in October/November).

All of this points to the fact that developing a commercially viable solution will be challenging given 1) the quickly closing window of opportunity pre-grid, and 2) the skewing of the market by free and heavily-subsidized offerings. That’s not to say that a subsidized or hybrid-aid model isn’t possible, but it veers away from a purely commercial approach.

As for me, it continues to be an incredibly exciting time to be in Myanmar. So much is changing, and I am learning an incredible amount about the people and the country here. I still struggle to incorporate physical fitness into my schedule, but with a much better overall feeling of health, I’m hoping that this will be more achievable now. Also, I have yet to go sailing, but it is still in the back of my mind.