After many failed attempts at trying to understand the telecommunications market here, I think I have finally figured it out. Here’s the rundown:

There are currently two operators:

Because of this setup, I need to juggle two SIM cards, which is an interesting experience, and makes me appreciate connectivity in the U.S. Apparently another company, Telenor, is going to launch soon. People are are hoping that it solves the connection issues and means not having to juggle SIMs.

So after managing this, I went to a Catholic service at a nearby church called St. Augustine. The Mass was in English, which was great.

Apparently there is another church called St. Mary’s which is larger, so I will probably check that out next weekend. I didn’t see anything in the weekly bulletin about a young adults group, which I had been hoping for (although helping to start one could be an option).

After church I checked out the Yangon Sailing Club. The good news is that it exists. The bad news is that it seems more like an “old boys club” than a sporting facility. To sail on the weekends (and apparently certain week days) you need to be a club member, and to be a club member you need to have three people in the club sign for you. There are apparently free events on Friday evenings, which I guess is where you meet people to network your way in. To be honest, I’d like to skip the pomp and circumstance and just get out on the water.

After this I went to my favorite Burmese restaurant for lunch and then went to the nearby shopping mall called Yankin Centre. 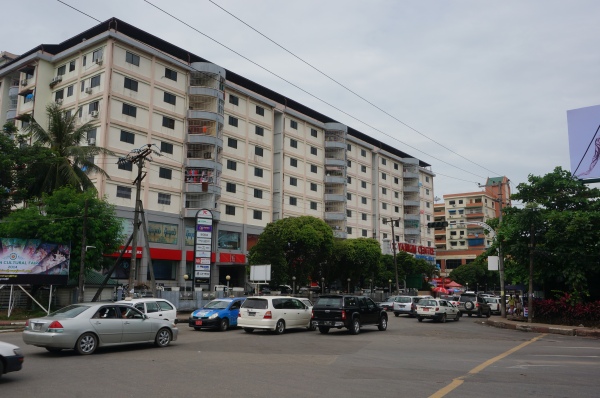 I wouldn’t compare it to developed world standards, but it has a grocery stores, number shops, and what appears to be a department store. Not bad.

After resting in the afternoon I went out to dinner with a friend of a friend who showed me Junction Square. Now this blew me away. I was shocked to see such a level of development in Yangon. Apparently it opened about four years ago. This is a mall that I WOULD compare to the developed world.

It wasn’t just the infrastructure that surprised me but also the people. Most of the people I have seen so far have worn traditional garb such as the longyi wrap (pronounced “lawn-gee”) and traditional face protectant thanaka (pronounced “tah-nuh-kah”). Here people wore western clothes and make-up. It was quite a difference.

Tomorrow is my first day of work. I’m very excited. I am hoping to stay consistent with the blog posts, but bear with me if they get more infrequent.

One thought on “SIM City”